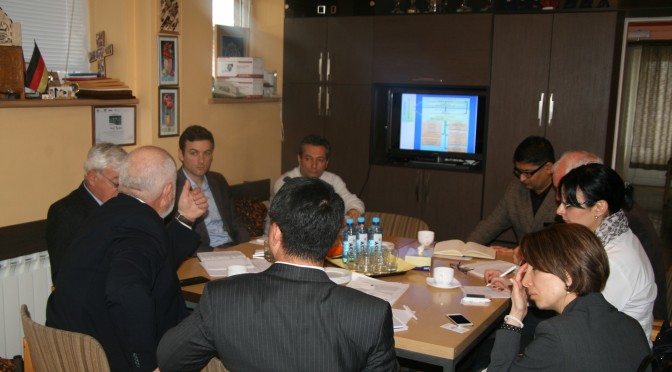 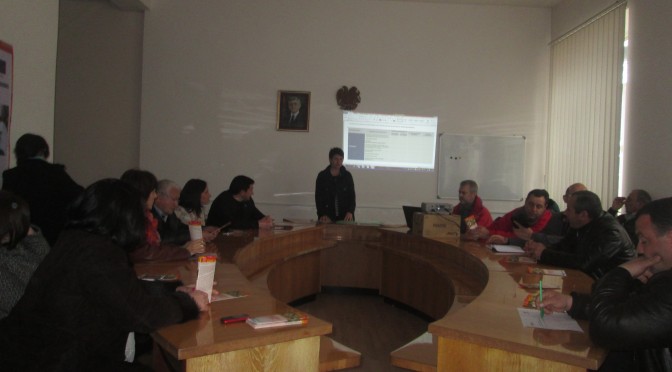 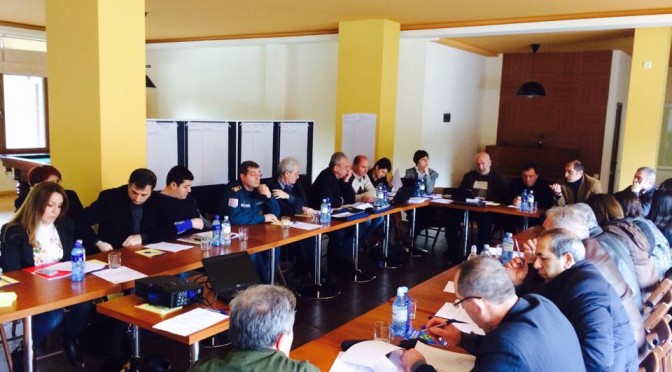 On March 25-26, within the frames of Disaster Risk Reduction National Platform , World Vision Armenia in cooperation with Stepanavan Municipality and the Ministry of Territorial Administration and Emergency Situation of the Republic of Armenia (MTA ES) has implemented “Stepanavan city resilience –lessons learned’’ workshop in Stepanavan, Lori region.
Representatives from the UN Development Programme, Armenian Red Cross Society, LORE rescue team, DRR National Platform, UNICEF, Armenian offices of Oxfam and Save the Children international organizations, as well as World Vision Eastern Europe and Middle East resilience sector coordinator Elsa Karnaby, as well as the Head of urban development Group Alineh Rahbany.
The objective of the workshop was to introduce the acquired ideas and experience of all the stakeholders of Stepanavan city resilience building process.
During the workshop, participants were divided into working groups and discussed sustainability, accountability and partnership strengthening issues. Each group came up with its speech presenting the activities carried out in Stepanavan, lessons learned and introduced relevant recommendations, which will be used to make the further process more efficient. The results of the 3rd UN World Conference on Disaster Risk Reduction held in March, 2015 in Sednai, Japan, where UN International Strategy for Disaster Reduction awarded Stepanavan city with the ‘Role Model’ certificate and approved Hyogo Framework for Action 2 (HFA -2) were also discussed. 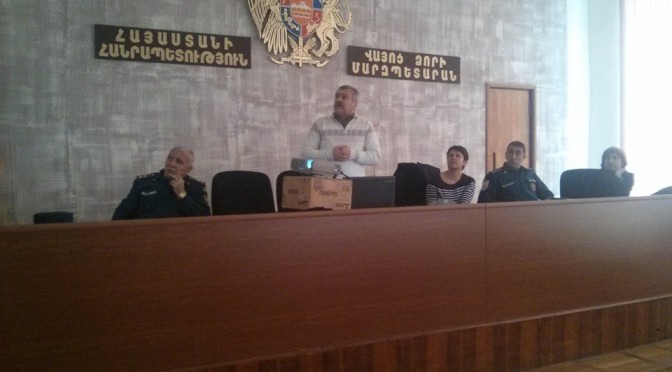 On March 23 within the frames of Disaster Risk Reduction National Platform a workshop was held regarding Local Level Risk Assessment Results implemented in 10 target communities of Vayots Dzor region.
The meeting was organized by Oxfam, “Support to Communities” NGO and Vayots Dzor regional rescue department.
The assessment was carried out by the European Commission Humanitarian Aid department’s Disaster Preparedness Program (DIPECHO) programme and within the frames of “ Supporting Community Resilience in the South Caucasus Region” program and in cooperation with“ Support to Communities” NGO, LORE NGO and ‘Against Legal Violation” NGO .
The role and importance of “Local Level Risk Management” (LLRM) model was introduced during the meeting, which helps to identify existing problems and provide relevant the ways to solve those problems.
During the meeting, the issue of “Community Risk Assessment” certificate was discussed, target communities were given the results of LLRM implemented in their communities.
Based on the evaluation results “Support to Communities” NGO in cooperation with stakeholders, will choose the priority risks in communities in order to implement small construction activities. 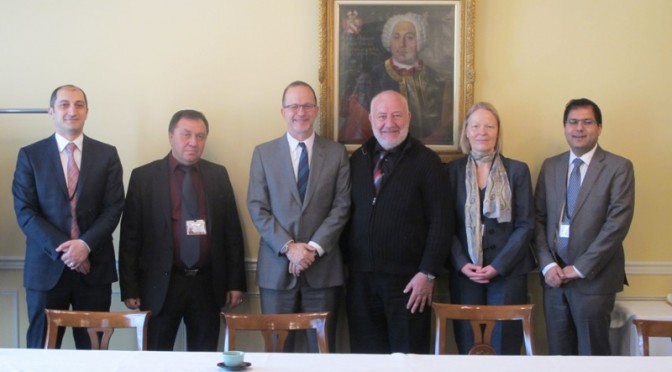 Today, on 17 of March, 2015 within the frames of WCDRR a meeting was held with the Armenian delegation and UNICEF representatives.

During the meeting with Mr. Ted Chaiban (UNIICEF, Director, programme division) Mr. Movses Poghosyan (DRR National Platform of Armenia /ARNAP Foundation/ director) highlighted the role and contribution of UNICEF in the process of DRR culture and the Platform development. Particularly, Movses Poghosyan highlighted the invaluable contribution of UNICEF Office in Armenia in the development process of School Safety Concept, as well as their active involvement in the thematic group activities. He suggested to enlarge the framework of UNICEF project activities, considering:
• Children, as disaster resilient environment creators for the nearest future, and in this sense, as a unique bank, where any investment is “a deposit with high profit return”.
• Armenia, as a favorable environment where “pilot projects” can be implemented expecting real and tangible outcomes to be further implemented in sister countries.
• The National Platform, as a project partner within the country which will essentially enhance the Platform capacities.

On March 15, 2015 a meeting was held with Mr. Rastislav Vrbensky (Manager of Istanbul Regional Hub, UNDP Europe and CIS) ) and the Armenian delegation members within the frames of WCDRR, Sendai, Japan.
On behalf of DRR National Platform Mr. Movses Poghosyan conveyed special thanks to United Nations Development Programme (UNDP), as their main partner, for financial support and active cooperation in the establishment and maintenance of the platform since 2010. Mr. Poghosyan highlighted that UNDP has been the main partner of the Platform, and that their main achievements have been the result of this active collaboration. It was mentioned that further cooperation with UNDP is very important for ensuring sustainability of the platform, as well as for introduction and maintenance of DRM culture in the country.
Mr. Mikael Gharakeshishyan thanked UNDP for active cooperation, highlighting that while the city resilience campaign was led by the UNISDR, UNDP Armenia had been actively supporting Stepanavan and other cities in the implementation of city resilience action plans.
* Stepanavan was awarded Role Model City certificate by UNISDR during the WCDRR.
Ms. Tatevik Koloyan briefed about the new projects and initiatives of UNDP DRR programme, such as the ICT for DRR component, country risk profile development and seismic zoning.
On behalf of the Ministry of Territorial Administration and Emergency Situations the Armenian delegation conveyed gratitude to UNDP for long term cooperation, particularly highlighting country’s achievements in the HFA period, such as disaster risk governance, DRM decentralization, risk assessment, institutional development, etc., as the major results of this partnership.
On behalf of the Minister of Territorial Administration and Emergency Situations Mr. Armen Yeritsyan the delegation conveyed invitation to Mr. Vrbensky to visit Armenia to meet with national counterparts and projects. It was agreed that the visit format and timeframe would be further discussed between the offices.
Mr. Vrbensky thanked Mr. Poghosyan and Mr. Gharakeshishyan for excellent cooperation, noting the results of UNDP’s partnership with the national counterparts, Armenia’s achievements in the field of DRR (also as a role model for sharing experience with other countries) and highlighted importance of further cooperation.DRR component was emphasized as an area where Armenia could have major achievement and become a role model to share experience with other countries, like in the case of the DRR National Platform.