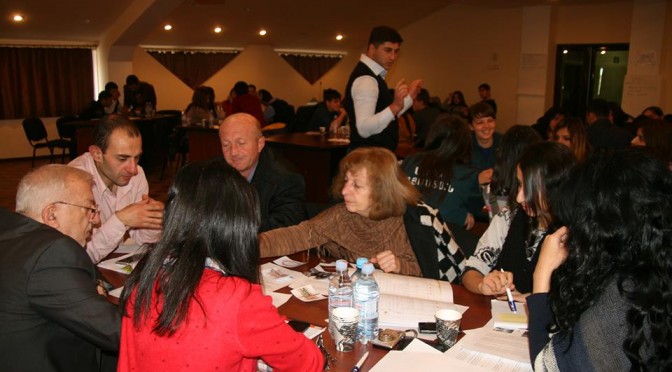 On November 24-26, one more training on ,,Environmental Emergencies and FEAT integration in Armenia” was held at Crisis Management state Academy of the Ministry of Territorial Administration and Emergency Situations.
The training was organized by the DRR National Platform within UN Development Programme and CMSA.

The workshop brought together representatives from the CMSA, MTAES, Yerevan State University and American University of Armenia.
The aim of the training was to teach the participants to apply FEAT instrument, be prepared to environmental emergencies and in the case of necessity to use this tool to reduce the impact of environmental emergencies.
During 3 day training, the participants learned about environmental emergencies, international response to environmental emergency, hazards and man-made disasters, Flash Environmental Assessment Tool theme and learned to use this tool practically in alleged emergencies. During the second day, Orjan Karlsson, the Chair of the Strategic Advisory Group on Environmental Emergencies (SAGEE), and an Advisory Board Member of Crisis Response Journal came to hand over the certificates of October 30- 31 training and at the end of the second , Wolfgang Schmidt, the friend of Armenians, German Red Cross (GRC) Baden-Württemberg Regional Organizations (BWRO) First Aid and Rescue Service Specialist was attended the training. 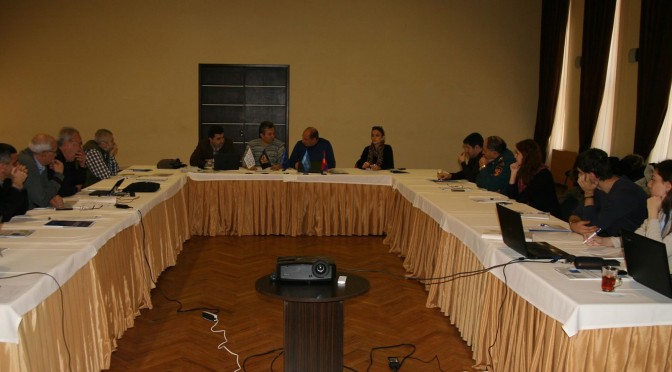 The purpose of the workshop is
• to sum up the disaster risk analysis implemented by working team / the methodology changes done in risk management at the local level (DRA / LLRM), child sensitive component development results
• to summarize and present the DRA/ LLRM instrument application process, approaches and results at 7 communities of Tumanyan region, Lori.
During the workshop , reports and discussion was done on “DRA / LLRM methodology changes, inclusion of child sensitive component”,”Research Presentation of DRA/ LLRM done in 7 communities of Tumanyan”, “DRA / LLRM methodology application processes in the communities”, “Road map based on DRA / RMLL methodology and developed tools’’. 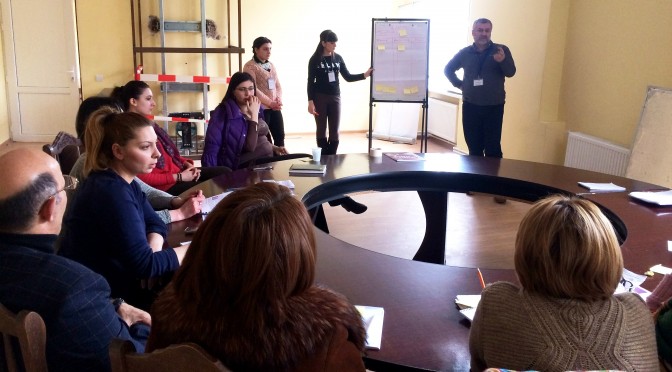 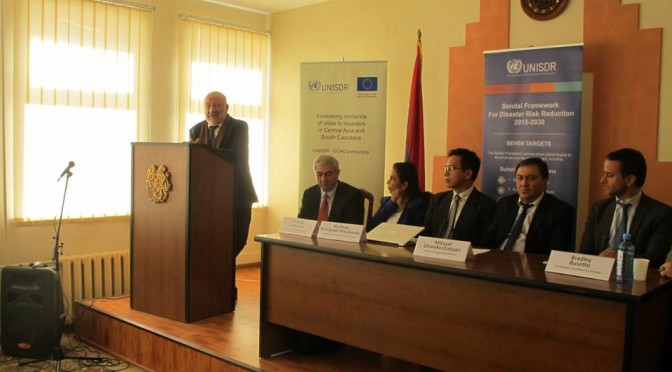 On November 12, the DRR National Platform within the Ministry of Territorial Administration and Emergency Situations, the UN Development Program and UNISDR Central Asia and South Caucasus Office visited to Stepanavan city.

The visit was aimed at summerizing the results of project “Urban resistance in South Caucasus and Central Asia”, and record the fact that Armenia, Georgia, Kyrgyzstan, Kazakhstan and a number of cities officially joined the global campaign ‘Make cities resilience. My city is getting ready “.
Noyemberyan, Berd and Tumanyan cities from Armenia joined the campaign. There are already 21 cities that have officially joined the campaign.
The event was held in Stepanavan taking into account that on March 14-18, the 3rd World Conference on Disaster held in Sendai, Japan, Stepanavan city was recognized as “exemplary” city. It should be noted that from 2800 cities joined the global campaign ‘Making cities resilience. My city is getting ready “, only 45 of them have been recognized as” exemplary “and Stepanavan in CIS region is the only city in this aspect. 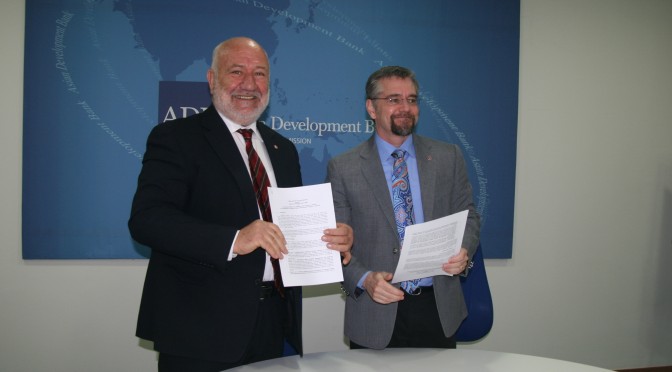 Today on 10 November a Memorandum of Understanding on Collaboration on Seismic Safety Improvement Program in Armenia has been signed between Asian Development Bank (ADB) and DRR National Platform. 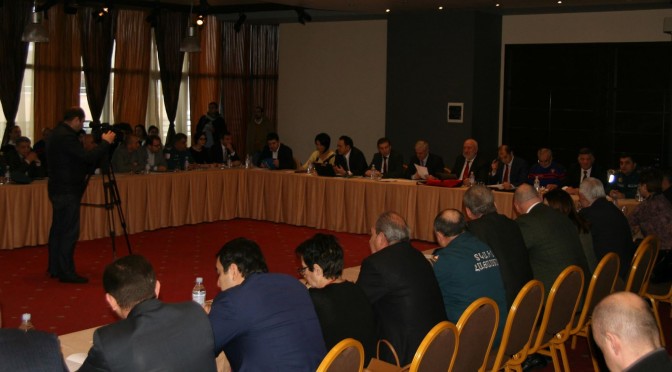 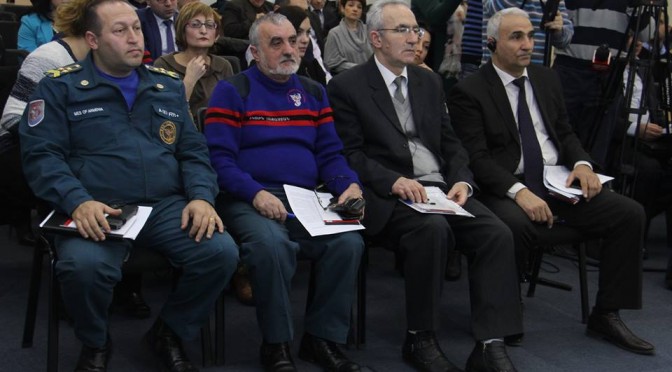 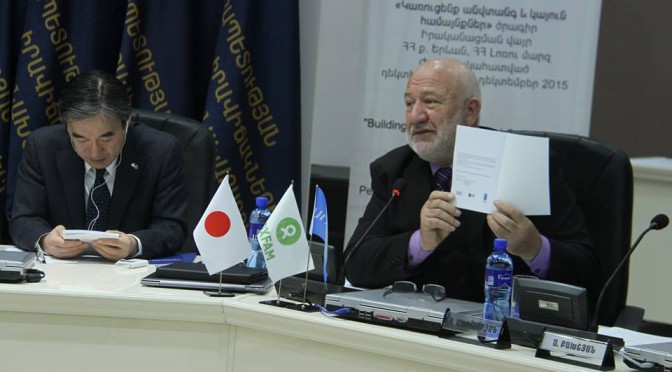 On 4th of November, DRR national workshop was organized with the initiatives of DRR National Platform fund and the UN Development Programme (UNDP) and with the financial assistance of the Ministry of Territorial Administration and Emergency Situations (MTAES),the United Nations Children’s fund, Armenian Red Cross Society.

The purpose of the workshop was to present.
• Action plan program and the ways of integrating priorities of the program in DRM national program
• Integration of DRR mechanisms and the challenges of sustainable development objectives;
•Sendai DRR action plan and “10 Lessons learned from the Fukushima disaster booklet’s Armenian translation and summed up the work done during one year in DRR sphere.
The event was attended by almost all the organizations involved in DRR.
Mr. H. Mkhitaryan, deputy minister of MTAES, RA, mentioned in his welcoming speech:
– It is undisputed fact that disasters are increasing worldwide, which grows the number of human and economic losses . Our country has recorded a number of achievements in DRR. These acquisitions are key prerequisites for the implementation of the HAP by the government and the importance of political will, as well as the assistance of the international and local organizations and experience. We will be consistent in implementation of the SAP.
UNDP Resident Coordinator Bradley Busetto said.
The government has recently taken significant steps to improve the system of DRM, HAP implementation and DRR development policies and the ways of integration programs. We are all aware that DRR activities can not be undertaken without government, international organizations, NGOs and the society. That is why we will continue to support and cooperate with MTAES and other partners.
The Japanese Ambassador Eiji Taguchi thanked for the invitation and said: It is a great achievement that disaster risk reduction is included in government programs. We hope that the same principle will be implemented in Sendai Action Plan, the Government of Japan will support these activities.
Movses Poghosyan as an event organizer and director of DRR NP fund welcomed and thanked all participants for attending, for the support to DRR NP and platform approach and presented 2 translations. The first is Sendai Action plan Armenian translation, the priorities of which we need the implementation of DRR activities during the next 15 years, and the second booklet on “10 Lessons learned from the Fukushima disaster,” . The translation of this booklet is very important as Armenia has a nuclear power. this booklet is based on lessons learned from the experience, which enables to gain experience to avoid mistakes.
In the afternoon, a number of reports were presented on “World Bank support Armenia’s overall approach to disaster risk management plan”, “Smart city” concept for Yerevan”, Global initiative for school safety, ”Armenia urban planning from the point of view of seismic risk of major cities”, “ARCS 2012-2015 “Building Safe and Resilient Communities” project accomplishments in Lori Region and the second phase, 2015-2018 main approaches” and “Armenia seismic hazards and major issues of risk assessment.
The event was organized in MTAES, RA.

Below is a video that presents the work of the United Nations implemented in the spheres of disaster risk reduction, climate changes and energy efficiency. 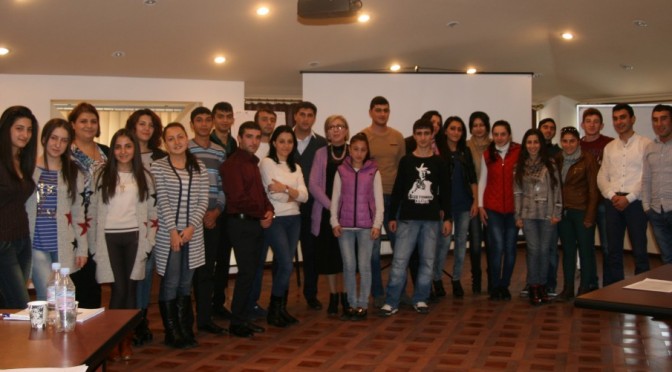 Now days we live in a society where there are many factories, enterprises have retained, produced, transported and used many chemical hazardous substances. Day by day the number of such objects increases, bringing with them many new dangers, from which people should find ways to protect themselves.
Realizing the importance of all these things, this was the 4th time in Armenia that the training on “Environmental Emergencies and Flash environmental assessment tool integration in Armenia” was organized.