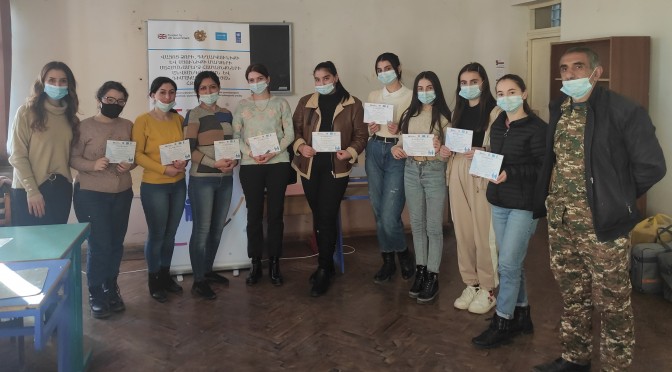 Within the framework of the 3rd phase of the “Strengthening the resiliance of the border communities of Vayots Dzor, Gegharkunik and Syunik marzes” project financed by the “Conflicts, Stability and Security Fund” (UK CSSF) of the United Kingdom Government, UNICEF and the “DRR National Platform” Foundation jointly continue the disaster risk reduction capacity building activites in the target marzes.
In the frame of the 3rd stage, it is currently planned to provide support to a total of 33 schools (one school in Vayots Dzor marz, 3 schools in Syunik marz and 29 schools in Gegharkunik marz). From 33 schools:
– in the 16 ones the school’s disaster risk management plan will be developed and a two-day training on “Fundamentals of Disaster Risk Reduction” will carried out. For other schools, these activities were implemented during the 2nd phase of the project.
– In the 29 ones employees and students included in the sectoral groups of alarm and information exchange, evacuation and shelter, fire safety, first aid and first psychological support will be trained.
First aid trainings will be conducted on-site, while trainings for other sector groups will be conducted online.
– In the 28 ones, taking into account the threatening hazards, scenarios for practical exercises will be developed, based on which an exercise will be organized and carried out in each school.

A number of planned activites have already been carried out in December. In particular:
– Representatives of the first aid team of schools No. 1 and No. 2 of Khndzoresk, Kornidzor, Tegh communities were trained, a total of 46 representatives.
– Disaster risk management plans have been developed for secondary schools in Tretuk, Shatvan, Kut and Norabak.
– Trainings for psychological first aid groups in target schools have started. In the first part of this three-stage process, the representatives of Ttujur, Vahan, Artanish and Jil secondary schools have already been trained.

Other planned activities will be implemented in 2022.