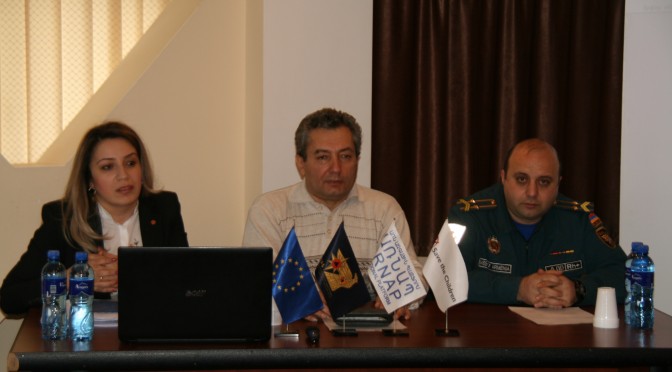 On December 15-16, Save the Children organization jointly with DRR NP Foundation and RA Ministry of Emergency Situations organized and held a seminar on ,,Disaster Risk Management and Child-Centered DRR” in Crisis Management State Academy. The seminar was for DRR teams of Avan, Arabkir and Malatia-Sebastia districts.

The aim of the seminar was to promote DRR teams’ capacity building and contribute the introduction of DRR component in development processes.

The seminar was carried out within the frame of ,,Strengthening Resilience through Child-Centered DRR in the South Caucasus”, which was funded by the Directorate-General for European Civil Protection and Humanitarian Aid Operations (ECHO).

The seminar was attended by the DRR teams of Avan, Arabkir and Malatia-Sebastia districts, representatives from DRR National Platform Foundation, Save the Children, MES, Crisis Management State Academy and UNDP.