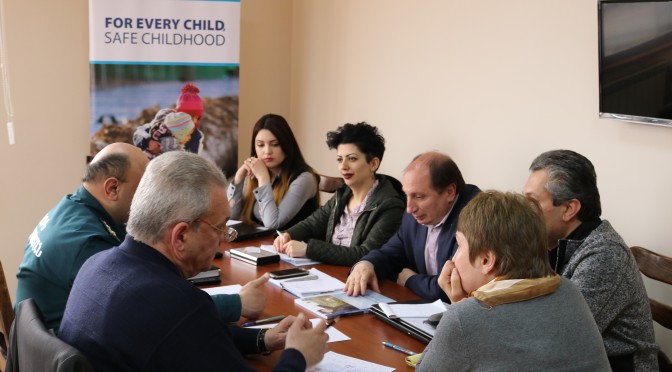 On April 13, 2017 an expert group meeting of “Ensuring Children’s Safety through Building Resilience of Communities and Education Institutions” project was held at the Ministry of Emergency Situations. The project is implemented by the DRR National Platform Foundation, funded by the European Union through it’s Civil Protection and Humanitarian Operations (ECHO) and UNICEF.

The meeting was attended by the representatives from the Ministry of Emergency Situations, DRR NP and UNICEF.
The aim of the meeting was to discuss the ongoing process of of developing tools for improved community and children resilience and the meaning of disaster risk.

In particular, the applied guideline of Local Level Risk Management (LLRM) methiodology and the possible ways of piloting, as well as the legal aspect of the guideline, issues with children and vulnerable groups were discussed, the timetable of the further actions was drafted.

The experts discussed in details those chapters of the guideline for the implementation of which communities will need professional support, so the order of receiving professional support needs to be developed and submitted for approval. It was decided that the draft of LLRM will be circulated among the departments of MES and partners of DRR NP to receive their feedback, according to which the guideline will be finalized. UNICEF will support DRR NP to to pilot the final LLRM guideline in two communities of Armenia, which are most vulnerable towards natural disasters. During the piloting, special attention will be taken at the development of community and marz level capacities, the issues concerning child sensitive indicators and vulnerability index, participatory approach to data collection, the analytical skills, as well as the difficulties of applying instructions of each tool included in the guideline of LLRM methodology․

Based on LLRM pilot results, the expert group will finalize the methodology and DRR NP will present it to the corresponding authoritiwes for approval.