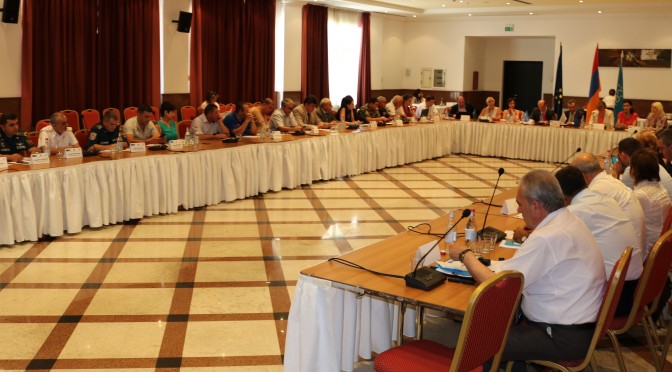 The final conference of the “Advancing National and Local Efforts to Reduce Disaster Risk to Children in the South Caucasus and Central Asia” project, implemented by UN Children’s Fund (UNICEF) within the framework of DIPECHO IV, was held on 1 August 2017.

The conference was organised by the “Disaster Risk Reduction National Platform” Foundation and UNICEF with the support of the Ministry of Emergency Situations (MES) of the Republic of Armenia.

The main goal of the conference was to present the work, implemented in the frame of the project, its outcomes as well as revealed challenges. All this was presented by means of presentations, each preceded by a short DRR video, made by schoolchildren, teachers and partner organisations.
About the Project

The above-mentioned project, implemented from 2016 to 2017, aimed at strengthening national and local capacities in Disaster Risk Management and Emergency Situations preparedness. Within the framework of DRR National Platform UNICEF cooperated with the “DRR NP” Foundation, RA MES, RA Ministry of Education and Sciences (MoES), RA Ministry of Territorial Administration and Development (MTAD) as well as other local and international partner organisations. All the works done in the frame of the project were child-oriented, i. e. there was a special emphasis on children’s rights and needs while developing DRM policies and strategies

• The Local Level Risk Management application guideline and Community DRR and ES action model plan were developed and piloted as a result of the cooperation between “DRR NP” Foundation, UNICEF, RA MES and UNDP. The aforementioned documents are intended to contribute to sustainable, risk-informed community development which, in its turn, will contribute to sustainable national development. They were piloted in the communities of Khashtarak, Getahovit and Yenokavan and the results of the pilots were presented by the representatives of those communities who highlighted the fact that if there is a wish and political will, there is no difficulty in developing DRR and ES plans or implementing the LLRM methodology.

• Safe School new module (safe.schoolnet.am) was developed by RA MoES National Centre for Technology in Education, with the support of RA MoES and RA MTAD, within the framework of which all the schools of RA were rated according to their vulnerability to seismic and other hazards. About 80 % of the country’s schools were assessed as buildings with middle or high vulnerability.

• The DRR and ES action plan in education sector was developed which aims at ensuring staff and students’ safety in educational institutions and strengthening educational institutions’ resilience as well as ensuring education process continuity in ES.
Mr. Hamlet Matevosyan, Rector of Crisis Management State Academy, highly appreciated the works done, emphasizing, however, that all these actions will not serve the purpose without the culture of resilience and safety. Knowledge can be useful only when it is in practice.
During the conference, three DRR short videos, made by the initiative of OxYGen Foundation with partners’ support, were shown.
You can read about the event also at: unicef.am

The photos of the event can be viewed at: arnap.am