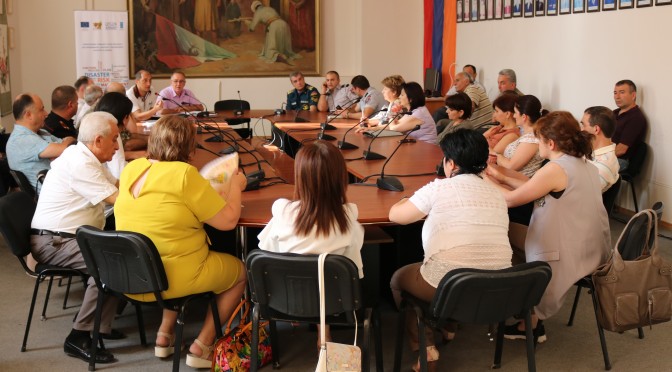 On 15-17 August 2017 a simulation exercise (simex) on “Disaster Risk Reduction (DRR) and Emergency Situation (ES) Response in Kapan Community” was implemented in Kapan community within the framework of the “Strengthening Community Based Resilience and Environmental Emergency Preparedness Capacities in Armenia” project, implemented by UN Development Programme (UNDP) and funded by the Directorate-General for European Civil Protection and Humanitarian Aid Operations (DG ECHO).

SIMEX SCENARIO
A magnitude 5,7 earthquake, with the epicenter coordinates of LAT 39.193315°; LONG 46.281345° and heart depth of 15 km, struck Kapan city on 16 August, at 10:23 AM. Preliminary data from the earthquake epicenter are provided on a regular basis, the damage dimension and degree are being assessed at the moment. However, the process is getting more and more difficult due to restrictions of information availability and connection. An emergency is declared in Kapan. The earthquake damaged Geghi Reservoir which, according to the preliminary information, entailed the flow of the reservoir’s water resources in the direction of Kapan city. In the result of the earthquake and its secondary effects there is a possibility of Artsvanik dam damage.

The simex aimed at piloting the DRR and ES Action Plan draft by the previously confirmed scenario as well as testing the collaboration mechanisms and capacities between Kapan Municipality and other structures in ES.

The simex was organized by the Fund for Disaster Risk Reduction National Platform (DRR NP), UNDP, RA Ministry of Emergency Situations and Kapan Municipality. About 20 local organizations participated in it.

On 15 August the simex preparatory works were carried out. A gathering was organized for the representatives of all the organizations by the Community Head. The aim of the gathering was to present what was planned to be implemented as well as to answer the participants’ questions.

On 16 August the simex was implemented. About 20 cases within the earthquake scenario were simulated which brought to the surface a number of drawbacks in the field of cooperation and mutual assistance. The latter were collected to be taken into consideration while refining the community DRR and ES Action Plan. After it is refined, the participant organizations will develop their own plans based on that of the Community.

On 17 August three cases within the earthquake scenario were simulated.

The first case was the evacuation of kindergarten children and staff during an earthquake.

The second one was the evacuation of people with physical harms from a high-rise building and those stuck in upper floors of the building with the help of ropes after an earthquake.

During this simulation case the capacities of International Search and Rescue Advisory Group (INSARAG), especially that of providing First Aid to the affected population, were revealed.

The third case simulated a crash of a vehicle transporting 10 tonnes of ammonia. In the result of the crash there was an ammonia leakage. The fire-rescue team responded to the accident; the team had been trained to how respond to such cases with chemical, biological and radiation effects within the framework of the aforementioned project. The professionals investigated the accident scene, used the “Flesh Environmental Assessment Tool” (FEAT) to find out the distance at which the ammonia leakage threatens people’s life and health, implemented population evacuation from the danger zone and covered the ammonia transporting vehicle with a water curtain, preventing the ammonia expansion in the environment.

The simex results are still being developed. They are planned to be presented at a seminar held at the end of August.
For photos follow the link: arnap.am.