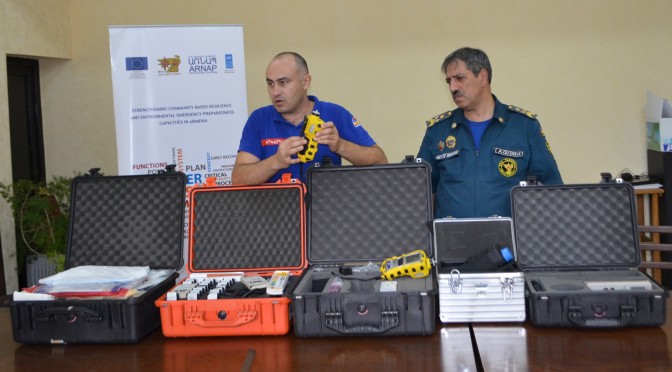 On 16 August 2017 a training on “Strengthening Radiation, Chemical and Biological Capacities of First Responders” was held for Kapan firefighters’ team.

The training was organized within the framework of the “Strengthening Community Based Resilience and Environmental Emergency Preparedness Capacities in Armenia” project, implemented by UN Development Programme (UNDP) and funded by the Directorate-General for European Civil Protection and Humanitarian Aid Operations (DG ECHO), in collaboration with “DRR National Platform” (DRR NP) Foundation and RA Ministry of Emergency Situations (MES).

The Ministry of ES is intended to strengthen Syunik Regional Rescue Department capacities in radiation, chemical and biological protection by enriching it with personal protective equipment, dosimetric and chemical inspection equipment. However, for the right implementation and preservation of the aforementioned equipment, the staff should have been provided with appropriate knowledge. Taking into consideration the above-mentioned, UNDP and DRR NP supported the Ministry of ES to organise and implement such a training.

The training was facilitated by the officers of chemical, biological and radiation team of RA MES.

The specialists spoke on radiation, chemical and biological risks and threats, territory inspection as well as the methods and mechanisms of finding out hazardous chemicals and biological signals in case of emergency situations.

A number of personal protection equipment were demonstrated by categories and the meaning of each was explained.

Devices, identifying and measuring chemical, biological and radiation hazards and sampling supplies were demonstrated; their application order was presented.
Three participants were selected to participate in one of the simulation cases in Kapan on 17 August to put the gained knowledge in practice. A crash of a car, transporting 10 tonnes of ammonia was simulated. The accident brought to ammonia leakage. It was expected from the specialists to inspect the territory, find out the risk dimensions and organise a response to nullify or reduce the risk.